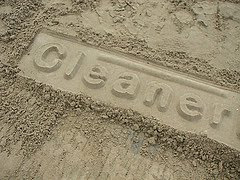 Cleaner Parks was a company with an ultimately 'Green' goal of cleaning up the provinces provincial parks-- or the ones with beaches anyway. The idea is simple: Press ads into the beach sand like a boot into mud, and do it in a sustainable and novel way.

I started by devising a way to press the ads. I was going to model it after a boot, and use a three dimensional mold to create the impression areas. As a prototype, I built a small box (about 12" x 48") and used the domain name (cleanerparks.com) as the testing ground.

Deciding that foam would be the simplest to work with, I used a scrap piece of SM board (the blue foam nailed to the outside of new homes) and a hot wire cutter to shape the foam. To get the design on the foam I just used an overhead projector and transferred it with a sharpie. I made sure that the design I chose (the letters) had a border that I could 'three-dimensionalize' during the cutting process.

After I had all the letters cut out, I glued them in the box and gave the whole thing several coats of paint. I wanted to both A) seal the edges and B) smooth out any inconsistencies. (I made improvements to this process in the full size prototype).

The next step in the process was the rubber. I used a binary mix called 'room temperature vulcanizing polyurethane rubber'. Basically it's two parts that you mix together and let set at room temperature. Once it cures, it's a smooth brown, semi-transparent rubber with about the same bouncy-ness/flexibility as 2 week old jello. It stinks.

As a stroke of brilliant foresight, I embedded a strip of seat-belt webbing length-wise in the mold.

When the curing process (which is anywhere from 4 to 24 hours depending on the rubber) was complete (I gave it a day) I yanked out the rubber slab (using the seat-belt webbing) and had myself a mat. In the process I basically destroyed the prototype mold, because I failed to apply a release agent to the mold before pouring the rubber in. This kid of rubber really wants to stick to stuff, and so without the release agent, it thinks you want it to fill the mold and stay there. Not good. I smashed the sides off the box, annihilated the styrofoam letters, and pealed up most of the paint--- but I learned something, and that's the point.

So now I had a mat (call it Alpha), and it was time to find some sand. My plan was to do some tests, take some pictures, get the marketing machine moving and have some clients before I had to even build a full size mat. (I was grossly optimistic). I went to the end of my friend Chiron's street in Wasaga Beach, and raked out some sand and pressed away... Success.

The letters on this Alpha Mat were 3/4" deep, using Arial Rounded Bold (I think).

It was now time to start thinking bigger. The full-size Beta Mat would be 5' wide, stretch 12' long creating an advertising area of 60 square feet. This decision was based on several factors that ultimately didn't matter. The new mat was also going to be shallower. During the alpha test, I discovered that the depth of the mat and mold was ultimately not necessary to create enough definition and contrast to show up. I made the Beta mat letter depth just 1/4" thick, and this solved a lot of problems. Less rubber needed to cover them (which is expensive), less weight to move around when it's done (because this polyurethane is heavy), and thinner foam to work with when making the letters. I went to a 1/4" styrofoam from the 3/4" SM Board for the letters, but this cost was negligible.

Using the same projection process to transfer the design to the foam, I marked all the pieces and started cutting with my hot-wire cutter. Part of the deal that I made with the Wasaga Beach Provincial Park management was that the first advertisement I did would be for them, gratis, in exchange for letting me do the rest of the summer with real paying clients. They got their nice message, and I got the rights to the medium. I also agreed to add a positive message like "Please don't litter" to all the subsequent ads I did, thus reinforcing the 'Cleaner Parks' concept.

See all the pictures of Cleaner Parks and the build process

Attaching the new letters, and now a logo, to the new full size mold was a lot of work. Much more than the previous prototype by a factor of about 20. The complexity of the logo (thank god) was very simple, and even had a rustic, un-even edge (which I exploited at times) so that was in my favour, however the sheer size of the mold presented many challenges.

The rubber had to be mixed in 3 stages, and because it starts to cure right away, this was almost a write-off. Luckily my dad and brother helped with this part, one pouring, one mixing, me spreading on the mold.

So there are some looming questions at this point for anyone not familiar with the process. The biggest: How do you spread a 60 square foot rubber mat on the beach a few thousand times? The answer? Like a paint roller. The mat itself wraps around a large reinforced steel cylinder and is secured with tension straps to the interior. This custom built cylinder is attached to a frame which extends out from a standard trailer hitch. This hitch attaches to a vehicle capable of driving in beach sand (in my case, a 2002 Ford Explorer SportTrac 4x4 which I bought WAY before I should have...) and is pulled down a freshly groomed beach rolling it's impressions into the sand like a textured paint roller.

Ultimately, there wasn't the market for tier one clients to advertise in this medium. Even though Wasaga Beach in the longest, most popular, and busiest beach in Canada, with over 2 million visitors each summer, the non-permanent nature of the impressions, and the relative cost relegates this to a 'guerrilla' tactic for big brands, and simply did not make the necessary impression with brand managers, media buyers, and agency planners.
cleaner parks