The new page and profile design Facebook is testing in their developer sandbox actually looks good. I didn't think I was going to like having to re-learn things, as I typically don't like new things (--cough) but I think they're on to something.

From what I've been reading over the last few months on the Facebook Developer Blog and the Profile Preview page, many of the changes being implemented are to quell the disapproval of the users with the infiltration of tens of thousands of Facebook Apps-- while avoiding the inevitable alienation of the app developers themselves.

The new design features a new sub-tab level with Feed, Info, Wall, Boxes, and More+ which hides the stuff that was normally residing on a users mile long profile page, viewable all at the same time. It does allow a little more flexibility with each though, as the real estate for each has increased slightly. The feed example is that instead of just ten items, it looks like there are now about 30 postings to the feed-- but that's it on the page.

The other big change is from a centered-fixed-width design to a floating-width design with a top floating nav, and a centered main content section. I'm curious to see where the advertising will go in this new design. It doesn't immediately present an opportunity on the left or bottom like the current design. 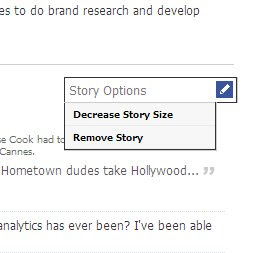 One last nice change (and I'm sure there are more, and I just have yet to discover them) is the AJAX live edit feature for many of the components. As a user hovers over a box, an edit crayon/pencil appears and the feed story can be reduced in size (for example) or the networks list can be hidden.
facebook programming