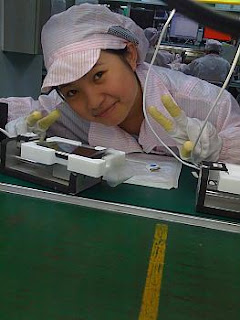 A young Chinese worker who is the subject of a few photographs has become a mysterious icon of fame for those in the small, mac/iPhone, nerd-world. The girl, an employee of Foxconn, the Chinese manufacturer of the iPhone and many other Apple products, is apparently an assembly or testing worker, and was photographed with an iPhone during some part of the test process.

The pictures were not deleted by the employee who took them, and subsequently ended up in the hands of one lucky/unlucky iPhone 3G owner when he unboxed his new toy in the U.K.

Nothing is known about the girl, other than being confirmed by Foxconn as indeed an employee. The company made a statement about the pictures, saying that it was just an accident that they weren't deleted, and that testing the camera on the iPhone is part of the process. Rumours are flying about the age of the worker, the fact that she may be fired for being the subject of this news, and that she may also become a cult-status icon of iPhone users. 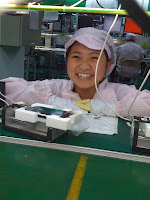 I say-- who cares? If I found a picture of a stranger on my new phone I would be more inclined to delete it, then to make a big deal about it. VIA Associated Press