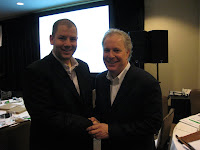 I don't live in Quebec, and I have no interest in the Quebec election, however I do listen to CBC, and I like Jean Charest.
I met Mr. Charest in Montreal in April of 2008 at a training session hosted by former U.S. Vice President Al Gore.  Mr. Gore was doing a session on the proper delivery of his "Inconvenient Truth" slideshow, and I was one of a handful of people who got to participate.
It's no wonder that this man has been the premier of Quebec for the last 6 years; he is a confident and charismatic leader, is impeccably bilingual (frequently going between english and french during our session and in conversations at the breaks), and I finished my conversation with him thinking "Why did the country elect Kim Campbell instead of Jean?"   (Note: Kim Campbell was the Prime Minister of Canada for about 7 minutes in the 90s).
Why is this relevant?  The Liberal Party of Canada is heating up for a battle in the coming months for the leadership of an absolutely decimated political infrastructure.  Bob Rae still reminds me of NDP/Ontario frustrations and his roommate from University Mike Ignatieff hasn't demonstrated any aspirational, hopeful, emotional leadership since coming on the scene the last time.  Dumb and Dumber.  Wouldn't it be great if Jean Charest was our own 'Obama' ?
politics