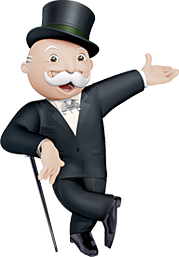 This holiday season, my brother-in-law gave us the new Monopoly World Edition, the one with all the cities of the world voted by popularity.  (Note:  Canada has 3 cities on the board, while the United States has only one...)
The game is 99% similar to the Monopoly we all grew up with, barring the single exception of speed.  Well-- a few other things too, but the end result it speed.
The new game has a debit card system and a 'bank' instead of the traditional cash and banker system.  Because of this, when there is a transaction, the two cards of the players involved are jammed in a little electronic device and within seconds, the funds are transferred.  This makes the game incredibly fast.  What used to take an entire weekend of elaborate and complex business strategy can now be rapidly executed after dinner.  The other thing with this game, and maybe it's just my poor memory from childhood, but it's essentially over as soon as you've developed hotels before the other players.  With rents higher than $10mil M (monopoly dollars) in some cases, you can bankrupt a player with a single unlucky roll.  (to put this in perspective, remember Baltic Ave?  The terrible purple property near GO?  That sells for $600k M, and is the cheapest property, whereas rent for landing on Montreal, which is the new Boardwalk, is enough to make you cry.
Maybe they did the math, did some focus groups, and found the single biggest obstacle to more popularity was the time it takes to play a game.  They made the prices escalate in such a way that if you're not lucky with the first few rounds of the board, and someone develops before you, you may have cash, but you'll be bankrupt very quickly.  At every turn there were reminders of the U.S. credit cruch, as you mortgage a property to afford a house on another property, only to mortgage that to pay rent when you land on another players house...
The only other major change is the Free Parking.  Remember when you'd land on free parking and get the money in the middle?  That's not happening anymore.  Free parking does nothing.