The challenge of marketing in two languages 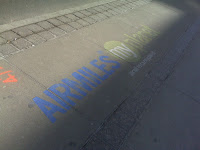 After working for Green Rewards for a year, and then being acquired by LoyaltyOne, I wasn't sure (back then) that we'd actually get this far. Today is the official launch of the new AIR MILES My Planet program.

It's interesting to go through the process of developing a new section/part/area of an established and well known brand. The My Planet stuff that I was fortunate enough to work on was the website. The group that I work with was responsible for creating the new section on airmiles.ca where Collectors can do a few different 'green' things. My favourite section in the tips and tricks.

The Tips and Tricks section has seven categories of things that you can do to reduce your carbon footprint, reduce your strain on our natural resources, and reduce the amount of chemicals you use in your house. Very Practical.

I'm also a fan of the inter-connection we've made with the AIR MILES Community. By linking the community, we get to tap the 5000+ (and growing) group of avid Air Miles Collectors that want to share their own ideas and experiences. We could only research and create so much for the launch of the site itself, but I anticipate a flurry of activity on the Community that will sustain the growth of the program.

Research that we did almost 2 years ago showed that people were eager to do something to help the planet, they would be willing to spend money to do it, but they simply did not have the information they needed to decide what to do. Well, now there are some ideas.

So what does that have to do with two languages?

Any marketer in Canada can tell you that when you're a national brand, or a company launching a national promotion, you have to consider our 'other' official language. I'm an anglo through and through, and though I took French in school and put on a funny fake-accent, I really don't understand the nuances of the culture. What I've learned is that even people who are FLUENT sometimes don't understand the nuances, unless they live and breathe it.

When creating content for a bi-lingual site, I see there to be two distinct ways to do it. The first, and what most companies, brands and even governments do is to create in one language and translate to another. This works in most cases, but has drawbacks. Things like local-isms that may make sense to an english-speaker in an english province, once translated, make no sense at all. This diminishes credibility in what you're trying to do (but only for those reading it in the other language).

The second, and far superior way to program/develop/write/design for a bilingual culture is to co-create. I learned this term from Bianca Barbucci, a former colleague and friend who lives and works in Montreal, and is a seasoned marketer with experience from startups to national corporate giants, both agency and client-side.

The term, as I understand it, means to decide what needs to be communicated (like any agency creative-brief process) and then let native speakers develop language and sometimes actual art creative in their own language. Obviously the messages will be different. They won't necessarily translate (and that's the point). But what happens is that the French readers feel like they're reading something written in French, not written in english and then expertly translated. There's a difference.

So how does this affect social media?

Twitter is a great example of an environment that facilitate multi-lingual communication, but doesn't make it easy for a marketer. If I'm just a person on Twitter, and I tweet in Arabic, then only readers who read Arabic are affected. I probably wouldn't get many followers in English. But what if it's a brand doing the tweets. Do you translate? Do you make a separate account for each language? You you give two different people (ENG and FR) access and co-tweet?

Definitely an issue. No clear answer.

With the Community for Air Miles Collectors, the forums are set up to be distinct. When you're looking at english content and you hit the 'Francais' button at the top, it changes the page, not the posts by the random guy in Alberta who doesn't speak french. You have to go to a French forum to talk to French people.

I think experimentation + respect = success. As long as you recognize that people speak different languages and have different cultures, you can market to them properly. Try a few things, see what works. (If you know the right answer, let me know!)