Toronto is too clean. Weird huh? 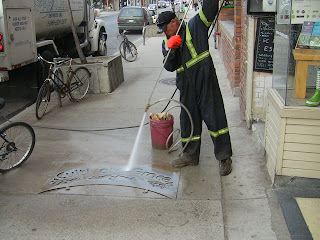 Last summer I went through the process of starting a business that would 'clean' messages into the (seemingly) dirty sidewalks, streets and other areas of Toronto. I called it Washvertising, and even built a kick-ass website.

It was going to be an eco-friendly way to leave a message, ad, or logo on a public space without breaking any laws.

It turns out that after many tests all over the city, there just wasn't enough dirt around to create the right contrast necessary to show the ad. Today, ad agency Green Graffiti found the same result in Toronto. Read all about it on Torontoist here.

I shut down the idea after my tests because I determined that unless you could reliably deliver the service to multiple clients in a profitable way there simply wasn't a business-- just a novelty. Leading up to Earth Day (April 22nd) I've so far had 3 different organizations approach me about this type of work (for obvious reasons) and I decided to just tell them how to do it, rather than try to make money off them. Hopefully it works out for them and we'll see some more. At the end of the day, it's a pressure washer and a stencil; not rocket science.


GreenGrafitti cleaning on Bloor for mykula.ca from Andreas Duess on Vimeo.