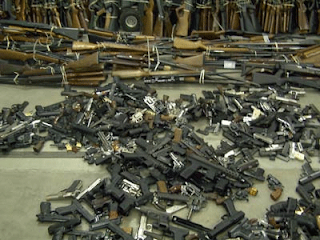 There has been a lot of chatter on the radio lately about the private members bill to eliminate the Canadian Gun Registry on which our government has spent over $2bn over the past 5+ years. It got me thinking about guns, shooting as a sport, gangs, gang violence, illegal sales of weapons, and other related things.  Here's what I think, and I welcome your comments:

People like to shoot guns for sport. This is commonly the argument to keep guns legal in Canada, followed by "You can't regulate insanity-- people will either use a legally obtained gun or buy and illegal gun and go on their rampage--why punish the legal owners?"   Well how about this: Make possessing a gun a crime so bad that that 14 year old gangster wanna be will actually consider not doing it.


Imagine if having a gun on you (assuming you are not a FAC licensed person) brought an immediate and unappealable 5 years in prison, whether you've shot it or not.  Add 1 month for every bullet found on the person.  So someone has a handgun with a 13 round magazine-- they get 6 years 1 month.  They're carrying a shotgun with two extra rounds, its 5 years 2 months.  They're holding a box of ammo for their buddy (20 in a box?) that's 20 months.  TWENTY MONTHS for holding bullets.  I would not hold your bullets for you.

If right now, you can be a minor and rob a liquor store and get probation, what is keeping that gun off the street, or motivating that senior gangster not to sell it to that junior gangster, or motivating that caring but troubled older brother from inviting his younger brother along to learn the ways of the gang world.  (Note: these examples are heavily influenced by movies and tv).

If all of the sudden the only guns on the street are being held by people who are absolutely going to use them (not just those that need to look touch, threaten, rob, intimidate, etc) then crime will spike a little then drop off dramatically.  Why would I want to even come close to a gun if basically touching it could send me away for a long time. What if it sent me far away too.  Instead of going to my local prison, (as a youth), I was sent to a neon-rider-esque farm in the middle of nowhere.

OK-- now the non-gun-criminal ideas.  Why are companies allowed to bring these guns into the country (if they aren't manufactured here?) because they "are sold legally to those involved in sport, and who have the proper license".  I call bullshit.  Let the cops develop vendor relationships for their weapons and get everything else out of stores.  (I'm talking handguns and assault rifles BTW.  I think if someone wants a rifle, they are probably fine)

Eliminate the supply (import restrictions), destroy the demand (ridiculously high jail time for gun crimes), and then put the money that we're saving into community programs and policing.

I realize I made that sound all too easy but seriously, how hard does it have to be?  Because the gun lobby is powerful, this will never happen, however if a few people are millionaires, but we're spending billions on a problem, does that really make sense?  Plus all the killing and what not.