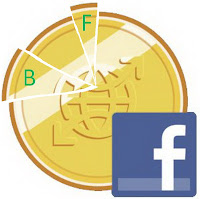 As we all know, the two biggest ways a rewards program makes money are breakage and float. There are obviously other ways, but these are the big and easy ones. I've talked about this before here, here and here.

Breakage is what happens when the company gets someone's money and doesn't have to redeem anything for it (for example, you have 90 pts, you spend 85, and nothing costs less than 10.  You're never getting those 5 points).  Float is when the company gets your money today and then 18 months later has to do something with it, like buy you a TV or a trip to Hawaii.  In aggregate, having lots of other peoples money is awesome, because you can make money with other people's money.

So how does Facebook fit into this?  Facebook has been enhancing their Facebook Credits offering for some time, and there's some great info about it here. The point i want to make is that, different from a payment processor that flows through  the payment like Paypal or Google, Facebook is creating a currency that will be bought, stored electronically, auto-balance-increased (from a credit card, or the like), and then spent on their site and likely others.

Why does this matter?

People are going to buy credits today and not spend them until later (float), and may not spend them all (breakage). Facebook's Credits ecosystem is going to make them money, even when they don't have to deliver a product.  (Setting aside the ridiculous notion that the product is itself virtual and infinitely replicable with no cost for overhead or inventory...)  They are making money off making money.

So who's buying credits?

About 50% of people on Facebook still visit to play games.  This is why companies like Zynga are making billions of dollars.  It's this in-game crap that people will ultimately pay for. That, and Facebook's bread and butter-- ads.  It won't be long until other sites and businesses start to use the broad reach of Facebook for their payment needs as well.  What better way to instill confidence in a purchase that to tie it to your real identity, with a currency that is completely separate from your credit card and bank accounts.
credits facebook payments