Scanning at POS: The Past is the future 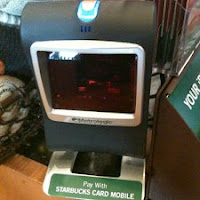 Myself and some colleagues went down the rabbit-hole on this one a while back. What's the difference between a Laser scanner and a CCD scanner? Won't everyone use NFC in the future? Will payments and loyalty be synonymous?

This is a big nut to crack, because we're talking about physical hardware differences, emerging trends in payment and loyalty technology, ability or willingness for retailers to upgrade or even change POS hardware, retailer requirements for payment type, loyalty card tracking and more.

Let's start with the hardware. Most retailers that scan a barcode on a product when they sell it to you are using some form of laser scanner. These scanners typically have moving parts so as to make the scanning process easier for the employee, but not always. Sometimes you see the straight-beam hand-held scanners in older retailers. The pros here center around flexibility, distance of the scanner from the code and cost. The cons are that there are moving parts that wear out and laser-diodes don't last as long as LEDs (found in the other major type of scanner).

The other major scanner type is CCD. This is the kind they use at the airport and at Starbucks. It has no moving parts and can read codes from shiny surfaces like phones, because it's essentially a camera. It's important to note that in most cases, scanners plug into a POS system just like a keyboard would, so most systems are expecting a string of numbers or other simple data. Most of the time.

So now we have to talk about 'other ways' to read things. RFID was pretty hot as an 'emerging tech' ten years ago, because everyone thought that the RFID tags would get so unbelieveably cheap that they'd be in everything, and as a result, everyone would need a reader too. Nope. Everything from privacy and security to production costs has slowed the adoption of RFID as a replacement for the UPC. Plus, would manufacturers ever have replaced the barcode, or simply added an RFID for enhanced and evolved retailers...?

NFC is very hot right now and has similarities to RFID in that it's a communication protocol between two 'near' things... Easiest example is your phone with an NFC chip and a reader. We went from putting chips on everything and paying with money to paying with chips and leaving the products alone.

So much technology--- who will win? Can anyone really win? Will the consumer win? I don't know.

Here are some scenarios that make me think we're not even close to the end of the game:

Starbucks: You walk in and show your phone screen, opened on the starbucks app, the CCD reader picks up your account number encoded in a 2D Barcode, validates that there's money in the account in milliseconds (as it would if you handed a gift card) and the drink is paid for. FUTURE: Your actual drink request is encoded in the code as well, so ordering is even faster. Or, even better, you're wirelessly transmitting the order AND payment to Starbucks through the internet. Fast and Secure. Would Starbucks go to NFC? It's a payment channel really, so they couldn't evolve their ordering process or loyalty as easily as through their mobile apps. Plus, lots of phones can show a code, but not many (yet) are NFC enabled.

Apple: You walk into an Apple retail store, pick up an accessory off the shelf. Scan the code on the product using the camera on your phone. Pay using your itunes account already linked to Apple via your credit card or other payment method. The app could make a recommendation based on other purchases or what's in your iTunes or App Store library already. You walk out of the store without even talking to someone. The app is both the sales associate and the POS and the currency is itunes.

Google Wallet Retailer: You walk into a store, pick up an item and proceed to check out. You tap a small NFC reader at POS with your NFC-enabled Android device which transfers both your loyalty and payment information to the retailer. You can engage at that point as well-- do you have points to redeem or a coupon to claim?  No problem.

Payments are too easy... What about Loyalty?

Old Navy: You walk into Old Navy. You have ShopKick on your phone and the ultrasonic sound being emitted by the ShopKick hardware in store is picked up by your phone popping a notification about an offer you may be interested in in another department. You check it out and as you walk over, you're rewarded just for visiting the department you may not have normally visited.

Savvy Retailer: You visit a physical store. Your phone pops a notification about an offer to play a game in store. Find a particular product, scan a code and a virtual version of the product will be added to your Sims wardrobe on Facebook. Buy the product and you'll earn your purchase back in Facebook Credits. You get home, visit the game on Facebook and are presented a complimentary offer based on your in-store behaviour. The loyalty loop is completed, backwards.

So, bringing it all back to the technology: Does the scanner matter? Do you need an NFC reader if you're a retailer? Who is your audience and how do you want to engage them? I don't know, but I think if the consumer is happy and having fun, everything will work out in the end...